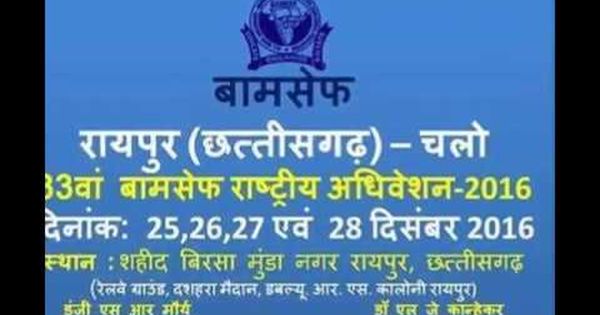 33rd National Convention of BAMCEF was successfully organized from 25th to 28th December at Shahid Birsa Munda Nagar, Raipur , Chhattisgarh. The Convention has created history in its four-decade history and was impressive reflection of evolving and enhancing matured organized, disciplined thought, cader building, leadership at all levels, streamlined democratic participation and deliberations. More than three thousand delegates from 23 states and about 150 districts, including Central Executive and various State Executive Committee Members and Office Bearers of the Backward and Minority Communities Employees Federation (BAMCEF) and its mass organization Mulnivasi Sangh, gathered for the convention. Delegates from Nepal, UAE, UK also participated in the convention. The organization conducted over six brainstorming awakening sessions spanning over four days with an objective to decide its future course and role in creating a society based on liberty, equality, justice and fraternity. It also conducted two delegate sessions with brainstorming group discussions followed by group discussion summary presentations by the group leaders. Also one dedicated session was provided for the Cultural participation of delegates from Mulnivasi Bahujan Society. Topics for discussion involved major thrust on discussing the near total overrepresentation and control of 7-8% Upper castes (Brahmin, Vaishya and Kshatriyas) over Judiciary, Media, Industry, Land and Education leading to denial of basic fundamental rights and endless misery of SC, ST, OBC and Converted Minorities. 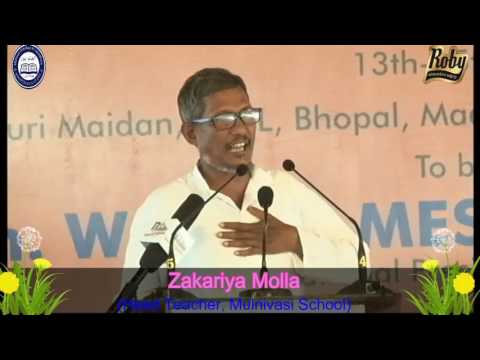 The convention started off the deliberations with the first awakening session on the subject, ‘Adiwasi Gotra (totem), Culture and their Brahmanisation.’ Second session saw a threadbare exposure of the conspiracy of the erstwhile NDA government regarding dominance in Indian Judiciary with topic, Justice is not possible, without adequate representation of Mulnivasi Bahujan in Indian Judiciary.

Second day of the convention witnessed stimulating discussions on wide ranging topics such as, ‘How Mulnivasi Bahujan Samaj can exercise control over changing shape of Brahminical electronic as well as print media.’ and Whether present Economic policy are in accordance with Article 38, 39 of Directive Principle of state policy of Indian Constitution.’ On the third day, after discussing the cader’s individual and collective behavior of in a democratic organisation in the morning session, the afternoon session deliberated on ‘Conspiracy of Samarasata to negate Samata (Equality).

The subject, ‘Social change can be achieved by giving supreme priority to Organisational work’ came up for delegate discussion in the evening session of the day.

The first session on the last day emphasized the fact that the work of the social movement is voluntary but very serious. The topic for discussion was, Organizing Scheduled Caste under Dalit Identity instead of Mulnivasi Identity is to instigate and encourage infighting amongst SC/ST/OBC.  The valedictory session would took place in the afternoon with key office bearers guiding the cadres for post-convention field work and thus marked the formal end of the national convention.

Two Documentaries were also launched in this convention. Street u Azad Kaha (Are Ladies are Independent?) and Chatrapati Shahu Maharaj were launched during the convention.

Espousing the cause of the two luminaries: Rashtrapita Jyotiba Phule and Dr. Babasaheb Ambedkar in his 125th birth anniversary year, BAMCEF has gained momentum in recent years and has been able to generate mass awakening on the issues that concern SC, ST, OBCs and the people from these communities converted to minority religions. With strong ideological base and committed cadre base all over the country, the organization can arguably claim to be the most genuine representative of the interests of the backward communities in India. Having presence in almost all the states and the UTs, BAMCEF is all set to increase the pace of the social revolution that aims at creating a society based on liberty, equality, fraternity and justice, the very ideals enshrined in the preamble of the Indian Constitution.